In his famous essay The Myth of Sisyphus, French existentialist Albert Camus argued that though life is absurd & meaningless, man can achieve relative happiness by acknowledging the true nature of his existence, revolting against it, and enjoying his freedom. 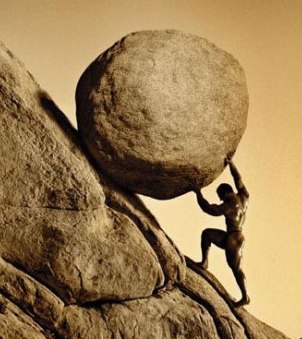 Camus then discussed some examples of men who achieve happiness despite the absurdity, but the greatest Absurd Man of them all, Camus reckons, is Sisyphus, the Greek mythology figure who was doomed to pushing a rock up a mountain every day, only to have to repeat the same task the next day, on and on and on for eternity.

The trick to life, Camus famously said, is to “imagine Sisyphus happy.”

Sorry Camus, but that’s a load of bull. It really sucks being Sisyphus and there’s no way he’s happy pushing that boulder up the mountain day after day.

Especially if Sisyphus is mid-career IT guy on the Infrastructure side of the house. IT guys are supposed to hate repetitive tasks, and if we’re pushing boulders up the mountain again and again, it’s automatic #ITFail as far as I’m concerned. Button pushing monkey work drains the soul & harms the career.

So we automate the boulder push via a script or cron job or scheduled task and then we put some reporting & metrics around boulder performance, and then, just like that, IT Sisyphus can chill out at the bottom of the mountain and feel relatively happy & satisfied.

Yet the risk here for IT Sisyphus is that the care & feeding of the script or cron job becomes the new boulder.

And that’s where I’ve been at these last few difficult weeks at work. The time-saving techniques of yesteryear are the new boulder I’m pushing up the mountain everyday. I see the Absurdity in this, but no one wants to join me in a revolt; the organization is content with the new-boulder-same-as-the-old-boulder strategy.

But I’m not. I’m a Systems Engineer, I’m called to be more than a script-watching Systems Administrator. I’m supposed to hate boulder-pushing, but I aim higher.

I want to defeat gravity.

As long as I’m pushing out five cent IT allegories & metaphors, I might as well mention this one.

Parent Partition has his Sandbox at home:

and soon, hopefully this weekend, the Child Partition will have finally have his Sandbox as well:

I have a whole bunch of good blog posts on the warm burner, but lately my free time has gone to terraforming the side yard and extracting cartloads of dirt to create a large play area & sandbox for Child Partition.

You might think IT guys hate manual labor like this, but to be honest, getting outside and literally toiling in the soil with spades, hoes, rakes and my own sweat & muscle has been regenerative.

Whatever your muse is, it’s good to occasionally step away from the keyboard and reflect on things while you struggle against the elements, as I have been for the last several weeks on Child Partition’s Sandbox. I’d like to blame the Supervisor Module Spouse and her tendency to move the goalposts, but really, this is my first landscape architecture project and to be frank, I’m not very good at it. I can’t even make the ground level.

Today, Microsoft’s purchase of Nokia closes. Nokia, as we know them, kind of cease to exist. Or do they?

Paul Therott, ace Microsoft blogger/reporter /pundit at WinSuperSite.com, is worried. What makes Nokia special & interesting, he reckoned on Windows Weekly, is the fact that it’s Finnish, it’s old and, as Leo Laporte pointed out, Nokia owns its own supply chain & manufacturing force. From rare-earth mineral extraction that’s safe & socially responsible to device design & construction, Nokia is a classic, vertically-integrated device manufacturer. Everyone else uses Foxconn; Nokia is the exception.

I’m a longtime Nokia fan…most guys my age were exposed to smartphones in the late 90s early 2000s era. Some went for Blackberry and its legendary keyboard. Others went Palm & Treo with either PalmOS or Windows Mobile. I was always in the Nokia/Symbian S60 camp until Android arrived on scene.

And I miss it. I miss my old Nokia E51, it’s fast, secure, and unique S60 operating system, and yeah, sometimes I miss the keyboard. And it was made in Finland! By Finns.

So I hope Thurott’s worries are misplaced, but I fear he might be right. Bland Pacific Northwest design sense & standardized Asian-outsourced product management are going to supplant the unique Finnish ethos that made Nokia, Nokia.

And I’m hooked. The ideal is closer today than it was a year ago, or even a month ago: agnostic computing. I loved Google for so long because I could get what I wanted on whatever device I had on me at the time; today I can do the same with Windows and it’s not so clunky.

I finally have a phone with a camera that is superior to my wife’s iPhone 5. It’s great.

More on the transition to O365 next week; have a good weekend!

20 yr Enterprise IT Pro | Master of Public Admin | BA in History | GSEC #42816 | Blogging on technology & trust topics at our workplaces, at our homes, and the spaces in between. View all posts by Jeff Wilson

20 yr Enterprise IT Pro | Master of Public Admin | BA in History | GSEC #42816 | Blogging on technology & trust topics at our workplaces, at our homes, and the spaces in between.